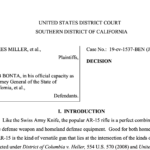 California District Court Judge, Roger Benitez decided that the “Assault Weapons” ban that had been part of California law since 1989 is clearly in violation of the Second Amendment of the United States Constitution. Before we get ahead of ourselves, the Judge also granted a 30-day stay on his ruling at the request of California […]