California District Court Judge, Roger Benitez decided that the “Assault Weapons” ban that had been part of California law since 1989 is clearly in violation of the Second Amendment of the United States Constitution. Before we get ahead of ourselves, the Judge also granted a 30-day stay on his ruling at the request of California Attorney General Rob Bonta. The temporary hold is to allow the inevitable filing of the state’s appeal. 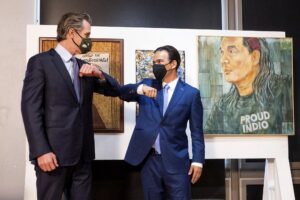 Bonta and Newsom are not fans of a Federal Judge’s ruling.
Photo Courtesy of The Associated Press

Even though it is still status quo in California, it is hard to deny the feeling that something big is brewing. For all the doom and gloom predictions with a Joe Biden Presidency and a federal legislative body that seems more anti-gun than ever, laws affirming gun rights are passing at the state level in record numbers.

For example, 6 states in the first 6 months of 2021 have passed constitutional carry laws. These laws remove the requirement to first get a license before carrying a handgun concealed. Before this year, 16 states had such laws on the books. Other states have removed training requirements as part of their permitting program, which means more than half of the states don’t require training to carry a handgun concealed. 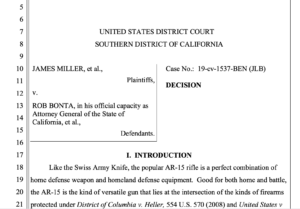 Now, back to the case.

The lawsuit was brought against the state in 2019 by Miller, and a pro-Second Amendment group called San Diego Gun Owners. Plaintiffs argue that California’s “Assault Weapons” law violated his Second Amendment rights.

Judge Benitez didn’t simply rule in favor of the plaintiffs. In his decision, he left no uncertainty or confusion on the preeminence of the Second Amendment. Part of what he said included: 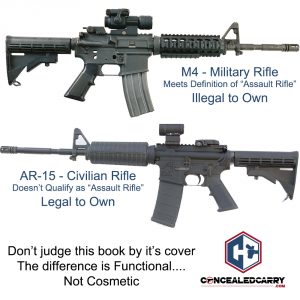 The “failed experiment” is in reference to the data from the 30-year period where “assault weapons” were banned. The government’s own study concluded that there were no statistically relevant ties to the ban and any decrease in crime. Any law that curtails a fundamentally protected right must have overwhelming evidence that is it necessary for public safety and thus is reasonable to restrict the individual’s right. So far, nothing has shown this is true.

In his ruling, the judge mentions the important D.C. v. Heller case, which affirmed the individual’s right to possess firearms commonly sold, and that right is not tied to membership in a “militia.” He said:

This case is not about extraordinary weapons lying at the outer limits of Second Amendment protection. The banned “assault weapons” are not bazookas, howitzers, or machineguns. Those arms are dangerous and solely useful for military purposes. Instead, the firearms deemed “assault weapons” are fairly ordinary, popular, modern rifles. This is an average case about average guns used in average ways for average purposes. 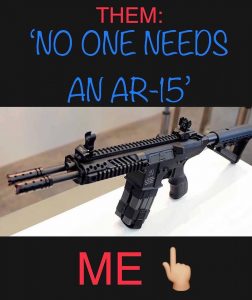 Not Everyone Agrees With the Ruling:

Of course, not everyone agrees. After the judge compared the versatility of the AR-15 to a Swiss Army knife, the disgraced Governor of California, who is facing a recall, said:

What do you all think? Will this finally be the case that makes its way to the SCOTUS? If so, will they even hear it? What does it mean in the short term? And was it a coincidence that the ruling came on “gun violence awareness day?”

Consider checking out the Concealed Carry Podcast, where we talk about everything related to the 2nd Amendment and self-defense.