Join Our Newsletter
Shop Our Store
MAIN MENUMAIN MENU
By Jacob Paulsen on April 18, 2017 in News 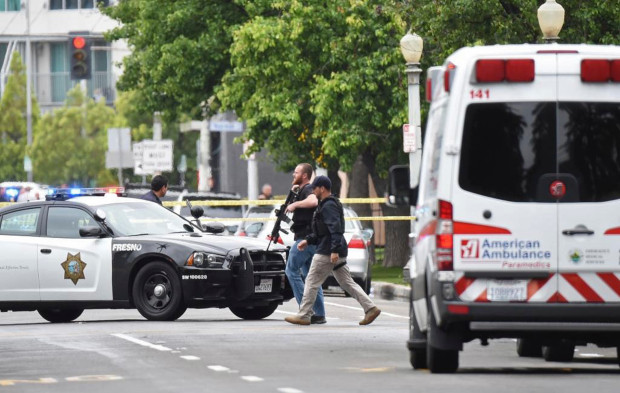 A 39-year-old man with a history of making terrorist threats is in custody after a shooting spree left three people dead near a Catholic Charities building in downtown Fresno, earlier today.

The gunman, who was identified as 39-year-old Kori Ali Muhammad, also went by the nickname “Black Jesus,” and told police he hated white people. All three victims in Tuesday’s killings were white. Muhammad yelled “Allahu Akbar” (God is Great) as he was being detained. Fresno police said it was too early to call the shootings terrorism.

Dyer said the shootings were random and unprovoked.

County offices were placed on lockdown and people were urged to shelter in place during the shooting.

Muhammad was recently wanted in connection with a murder that occurred last Thursday at a nearby Motel 6. Fresno police have called in the FBI and ATF San Francisco Field Division to assist in the investigation. Dyer said the suspect made other statements to police but did not go into any details about what they were.

Police were alerted about the incident through the shot-spotter system.

According to Dyer, Muhammad first shot at a PG&E truck along the 300 block of North Van Ness around 10:45 a.m., fatally striking a passenger inside. Muhammad then kept walking along Mildreda Avenue and Fulton Street, firing at least 14 rounds at three separate locations.

One person was killed while walking along the street and the third victim was gunned down while standing in the parking lot of a Catholic Charities building, according to police. Muhammad also shot at another person during his spree, but he missed that individual.

Muhammad used a pistol with .357 caliber rounds and used a speedloader to reload.

Police said that Muhammad’s Facebook account indicated that he did not favor white people and spoke out against the government. All the victims in Tuesday’s shooting were white males, according to police.

The imam of the Islamic Cultural Center of Fresno says the suspect in a shooting that killed three people was not a member of his center.