Join Our Newsletter
Shop Our Store
MAIN MENUMAIN MENU
By Matthew Maruster on May 20, 2021 in DGU, Law, News

The facts of an incident in Cathedral City, California, sound more like what you would find in a Hollywood movie. The incident is a perfect illustration of the castle doctrine. A legal principle existing in every state, in some form. Yes, even in a state like California with many restrictive gun laws, castle doctrine reigns. 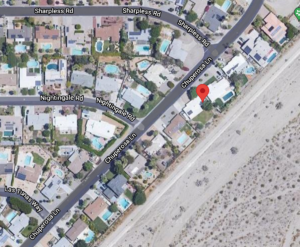 Police responded to a home invasion call in the 38200 block of Chuperosa Lane on the east side of Cathedral City. Police report that around just after 6 PM, a man broke into the home belonging to an elderly couple. The suspect told the homeowners to leave his home. The occupants attempted to reason with the home invader.

The conversation was unsuccessful in convincing the suspect to leave, and he told the couple he would kill them. The suspect would eventually leave the residence, but not on his own. The 85-year-old homeowner retrieved a firearm and shot the unwelcomed guest.

The suspect is in critical condition at the hospital, and the couple is alive.

As mentioned above, every state in the country has some form of castle doctrine, either codified or implied. In essence, castle doctrine presumes that a homeowner who shoots someone breaking into their home is presumed to have acted in justifiable self-defense. Now, castle doctrine is not absolute, and many factors go into determining if any force is justifiable or not.

A local news agency covered the story with this headline: Cathedral City home invasion shooting prompts question of rights California homeowners have to protect their home.

It’s hard to tell if the news agency went with a catchy title for the post or honestly believe there is any question on the right of people to use deadly force to defend themselves against an unwelcomed intruder threatening to kill the occupants.

Unfortunately, media and even police often butcher self-defense law and principles like castle doctrine and stand your ground law. As gun owners, it is essential that we understand our states’ self-defense and gun law and not consider the wrong information spread by misinformed reporters.

If you are traveling from state to state with your firearm, consider our legal boundaries by state book in either digital or physical form. It is the most comprehensive book of the various laws of the 50 states available. And just so you don’t ever have an outdated copy, the digital version is constantly updated to reflect any changes in the law. Either version gives you unlimited access to the digital version. Learn more about the Legal Boundaries By State book.

We also offer a comprehensive course called Complete Home Defense. It is an incredibly thorough series that teaches best practices for how to defend your family and fortify your home against bad guys.